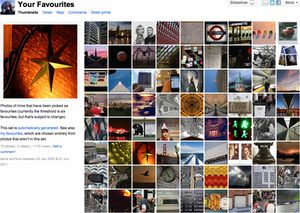 It’s based on a command line script written by Paul Mison – I wrapped it in Aaron’s gae-flickrapp and added a couple of templates. Not a huge amount of work, but it’s a nice thing to have lying around.

Regrettably, Flickr killed photo stats for non (grandfathered-only) pro accounts in early 2013, making favset useless. Sorry. The code  lives in github but it will do you very little good.